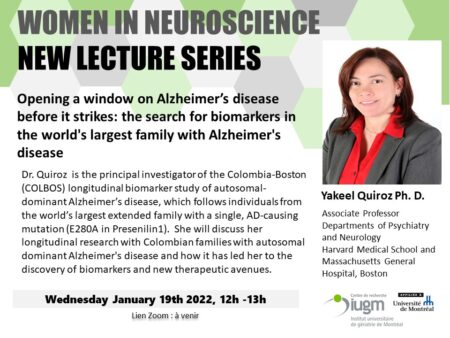 Dr. Quiroz is the Director of the MGH Familial Dementia Neuroimaging Lab and the Multicultural Alzheimer’s Prevention Program-MAPP. She earned her master’s degree in cognitive neuroscience and PhD in clinical psychology from Boston University. She completed a postdoctoral fellowship in neuropsychology and brain imaging of Alzheimer’s disease (AD) at MGH. Her research interests include brain imaging, genomics, early detection and preclinical biomarkers of Alzheimer’s disease and other dementias.

She is the principal investigator of the Colombia-Boston (COLBOS) longitudinal biomarker study of autosomal-dominant Alzheimer’s disease, which follows individuals from the world’s largest extended family with a single, AD-causing mutation (E280A in Presenilin1).

Dr. Quiroz’s research has focused on characterizing biological and physiological changes that may predispose individuals to develop memory loss or dementia later in life. Her work has already provided evidence of brain abnormalities in cognitively-intact individuals at high risk for AD, decades before their clinical onset. Her findings have helped the field to re-conceptualize Alzheimer as a sequence of changes that begins decades before cognitive decline, and which may be targeted by promising disease-slowing treatments at a time in which they might have their most profound effect. Her research work has resulted in several publications that have generated considerable discussion in the field and has achieved recognition by colleagues at the national and international level.